Did Morehouse Make a Man of Me? 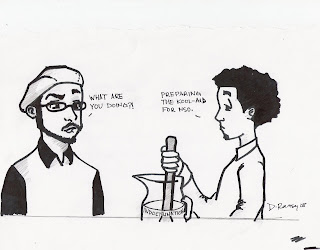 A third of this isn't going to make the newspaper. This concludes my time with The Maroon Tiger, at least that I can anticipate. That's all I think I have to say about that... for now.

Did Morehouse Make a Man of Me?
Anthony Harris
Opinions Editor
anthonydeanharris@gmail.com

I have a tendency to overdo things, especially at the end of things. When I used to work at Jazzman’s, I wrote a four page letter of resignation (single spaced) when I quit. When I graduated high school, I wrote a ten page manifesto and printed fifty copies that I handed out on the last day of school. Well, I have a page on a newspaper now, so I’d be remiss if I didn’t find some proper closure for the four years I’ve spent here (and the two years I’ve spent as the editor of this section).

When thinking about the years you spend in college, you tend to ask yourself many questions as graduation nears. Did I work hard enough? Did I do enough? What will I do after this? Is this what I really wanted? Is my future bright? These are general questions anyone asks himself/herself by the time college ends. Things start to get a little more specific with Morehouse, though.

When I look back at the four years I’ve spent at Morehouse, one question keeps popping up in my mind: did make a man out of me? When I look to the example of the Morehouse Man this institution has tried to mold me into, am I the figure I should imagine? Did the ideals sink in? Was I indoctrinated? Am I too bitter? Will the connections, friendships, and values I learned here be enough for me in the real world? I guess I’ll figure all this out in the very near future, but I do want to ask these questions a little more.

Did Morehouse make a man out of me? I’d have to say no. I have two spectacular parents. I have a great extended family with a wealth of knowledge, doctrine, and love. I have a Spirit-filled church back in that taught me a love of the Bible and how to live my life on the right path. I have a good foundation. If anything, I think I was up to the task of college. If anything, I’d say I was a man before I came here.

I spent four years away from home and living for myself as much as I could. That happens at any college. I learned so much from brilliant professors about Russian literary critic Mikhail Bakhtin, Ghanaian literary critic Augustus G. Amo, Chaucer’s insistence on using one’s wit, Richard Wright’s problems with Communism, William Blake’s racism, and other stuff in my many English classes. Other than all the stuff I took in the African Diaspora, I could have gotten a bunch of this stuff if I went to as I thought I wanted years ago.

I have a bunch of friends from all over the nation. I trust them with trade secrets and inside jokes. I consul them when they need it, and they consul me most of the time when I need it. We undergo the deepest conversations and the worst of drunks (do not play with the blue motorcycle). I have a close inner circle and a well connected extended circle with even more conversation and shenanigans. But other than the fact that just about all these friends are Black, I could have gotten this at any other institution.

My tastes have expanded. I entered as a guy who listened to nothing but jazz music (I still celebrate pianist Joe Sample’s birthday every February 1) and a bit of rock, to a guy who purchased Radiohead’s most recent album twice, have valid opinions about Paste Magazine’s choice for best album of 2007 (The National sound too much like they wish they were Interpol), think Transmetropolitan is one of the best comic books around, and believe MF Doom should stop fronting when he “performs” in concert. But I could have grown artistically at any college.

I learned how to navigate a city. I memorized stops on the MARTA. I can get to Ponce De Leon relatively easy now from the station. I think Centennial Olympic Park is just a beautiful place for tourists (despite many who believe is better overall). I learned Lenox doesn’t get the traffic it used to since Atlantic Station opened. I have a pretty awesome shirt that I got from Rag-O-Rama in Little Five Points that always gets compliments. But learning a comes with the territory of going to any college.

But this place has something different, something special. It’s encouraging to know so many Black men and women who want more for their lives. I feel wrapped in a security blanket knowing so many people who will look out for me in this close Morehouse network.

I know there are little things I never would have gotten anywhere else. Mr. Sherman in the cafeteria has called me “Professor” since before I knew I even wanted to teach. Gloster Hall has been a crash course in getting through bureaucracy. No other place in the world has Brother Mukasa Dada, a.k.a. Willie Ricks, a.k.a. Brother . The taught me how to navigate around any homeless person in the nation.

Even for an off-putting, brash workaholic like me, I’ve had a rather fulfilling college experience. I’ve grown in ways over the last four years that I never could have imagined. I feel like a better person. I feel like a new man, a Morehouse Man (or at least I will at 8am on May 18). But I still have to ask what has this institution done for me.

While I learned that when men are clamoring for attention (re: the SGA), it’s best to stay out of the way and watch the amusing show. I learned to always press the issues when administrators give you the runaround. I learned there is usually hidden financial aid somewhere. I learned a man can make his way into a lot of things if he works hard enough, but the road is easier if someone else helps pave the way for you. I learned the people you’re around can influence you in the best and worst ways.

Now, while I could have learned this at any other school, I never would have learned it the same way here. I discovered in four years what many encounter over a lifetime. I’ve grown as a man differently than many Black youth because of this school. My family learned to make due without their son and the take joy in his successes and in the success the Lord provided for him.

Perhaps this is the Mystique. Perhaps it is this intangible ideal that has permeated my being. I know I am a man. I know I will be alright. I know the Lord will provide to the point that I will not have room to receive the blessing He has for me (as he said in Malachi). Perhaps the liberal arts and the English classes and the different people and the endless Crown Forums actually sunk in.

I can’t quite put my finger on what Morehouse did for me. I guess that’s why they call it a Mystique. Identifying it won’t really help the matter, but there’s a quality about this school that makes it so appealing even in its inadequacies. It has a value like a diamond, pure only through its flaws. In my persistent love/hate relationship with Morehouse, the love has always endured. It has always held strong. It is ongoing.

Did Morehouse make a man of me? No. Did it raise me? No. Would I trade a minute of this place or a Trinity or an Emory or a Harvard or Yale? No. In four years of looking at evergreen grasses, tenure standards, elections, thugs and smoothies, wearing Kangols, fluorescent light bulbs, protests, and petty elections, I think I’ve grown as a man. In all this, I think I’ve grown as a Black man.

And I wouldn’t have it any other way.

Popular posts from this blog

To Be Young, Gifted, Black, and a Jazz Enthusiast: Apparent Needle in a Haystack

October 26, 2009
About a month ago, Patrick Jarenwattananon of NPR's A Blog Supreme  put together a group of lists of recent gateway jazz albums from prominent young jazz enthusiasts and bloggers.  The Jazz Now Project was a rather brilliant idea and opened up a lot of discussion and awareness about the future of jazz and really shows what the field looks like right now.  Early on the the culmination of this project, Jarenwattananon opened the submission of suggestions not only to those he specifically asked but also to other readers of the blog and on the email list.  So it didn't take me long for me to submit my own Jazz Now list .  (And special thanks to him for linking the post on the compilation of Jazz Now submissions. I got my highest hit count yet of 29 readers because of him. I really need more readers.) When I emailed him the link to my blog for submission, Jarenwattananon thanked me for my list and mentioned that I was the only black guy to have sent anything.  He figured that this
Read more